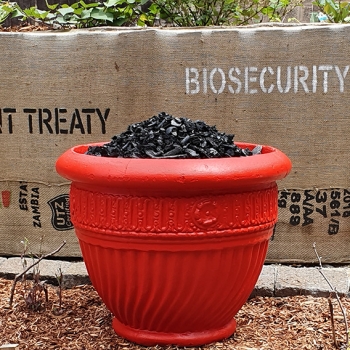 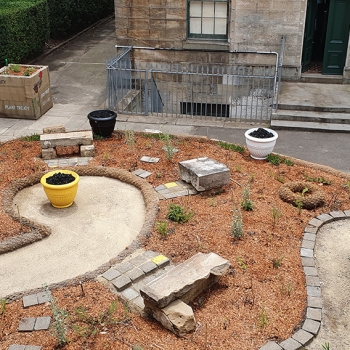 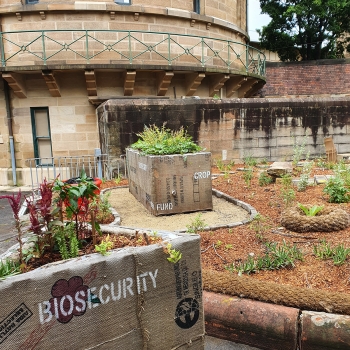 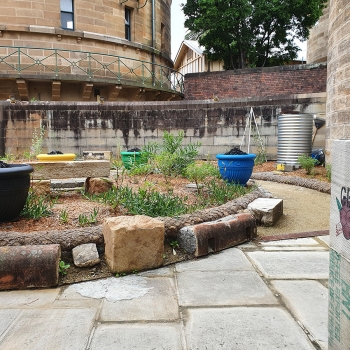 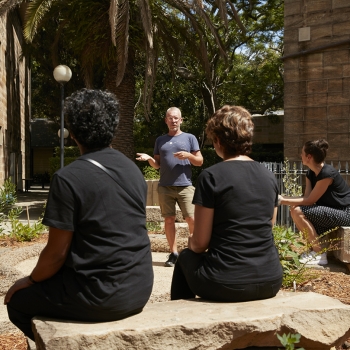 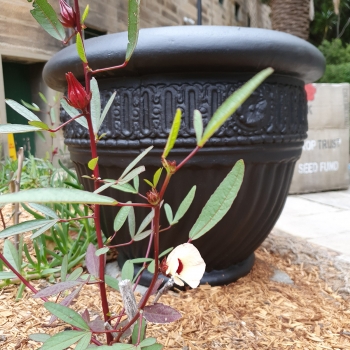 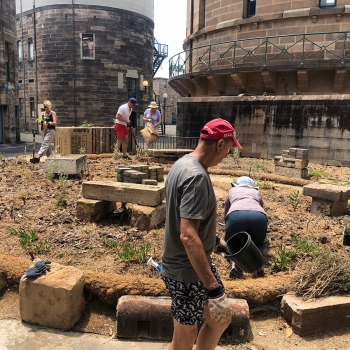 Alchemy Garden was commissioned for NIRIN the 22nd Biennale of Sydney, 2020. The project was a long-term collaboration and community garden developed over 1 year at the National Art School (NAS) with the Darlo Darlings community group.

The project responds to the seven themes of NIRIN:

DHAAGUN (Earth: Sovereignty and Working Together)

Alchemy Garden was developed on Gadigal country and incorporates plant related Indigenous themes from geography and land use of NAS’s location on the edge of the Darlinghurst Ridge. NAS is situated next to St Vincent’s hospital atop a former waterway and the Kangaroo fields, now Surry Hills and flat lands toward Botany Bay. Andrew consulted with NAS elder in residence Uncle Allen Madden and, Indigenous horticulturalist Clarence Slockee – co-founder of Yerrabingin Aboriginal Farm South Everleigh (now founder and director of Jiwah). Many of Alchemy Garden plants for this project were donated by Clarence. Non Indigenous plants were included from research undertaken in the NAS archives into former onsite food gardens and at the Royal Botanical Gardens Library for European edible weeds arriving with the First Fleet at Sydney Cove.

Alchemy Garden was created as an interactive community collaboration and community garden of edible and medicinal plants cultivated onsite at the NAS. Local community group, the Darlo Darlings, maintained it as an urban food garden while learning about soil creation and water saving strategies in context with alternative food practices in urban environs. The National Art School, at the site of the former Darlinghurst Gaol, has a dense and layered history from pre-invasion Indigenous land use to the present, expressed in the garden design with repurposed onsite heritage building materials with landscaping to highlight traditional sustainable practices carefully integrated into existing architecture. Such design practices, linked to the site, contribute to how the project examines and connects with cultural and ecological wounds, as well as offering opportunities for healing.

Andrew draws on his Germanic background of colonial settler farmers, whom carried diverse seed for anticipated crops when migrating to Australia during the 19th Century Prussian diaspora. Consisting of native and non-native species, Alchemy Garden engages with interconnected pathways of plants and human migrations, to examine ethnobotanicals that connect people and their actions to place. 2020 is the United Nations International Year of Plant Health and the artist points to links between big-agriculture rhetoric stenciled onto the self-watering planter boxes and nascent awareness of ancient food knowledge systems, such as Indigenous Australian and other First Nations cultures around the world. In this way, the project fosters a deeper awareness of the climate crisis and collective actions to mitigate its extreme effects. Because food security depends on healthy biodiverse ecosystems, Andrew posits that Indigenous agriculture and landcare technology cultures provide for non-Indigenous Australians a valuable view of Indigenous Sovereignty through sustainable food systems.

The project enlivened ecological awareness via interactive performance/ workshops on ethnobotanicals and related practices of soil, water and food sustainability in an urban environment. The Darlo Darlings who assisted with planting and maintaining the garden as a community food garden, highlighted the limits on access to land and challenges for people to grow fresh food in inner city environs where pollution and contaminated soil is a serious problem.

Key species grown in the garden: Pigweed/Purslane (Portulaca oleracea) is an important food and medicine plant with sub-species distributed globally, it is at the same time a native species and introduced species through human migration, its place of origin lost in time. Another is Dandelion (Taraxacum officinale) called Löwenzahn in German. Dandelion first arrived in Sydney Cove with the First Fleet and is naturalised throughout Australia by migrant communities. Dandelion is an agriculture/garden weed, or, depending on your perspective, an ancient highly prized food and medicine plant native to Eurasia and a main ingredient in Horta – a dish produced by the artist for a Foragers Walk & Talk event at the NAS.

For more information on the full list plant species in the garden: https://www.theconceptualcookbook.com/

The project reuses compostable disposable coffee cups for onsite seed propagation. Waste water from the onsite cafe and the ceramic department were filtered through charcoal in the central yellow urn into a subterranean wicking-bed reservoir, which also harvested rain from scalloped garden design features. In the lead up to, and during, the 22nd Biennale of Sydney (14 March – 8 June 2020), a series of events and workshops were programmed as ‘recipes’ for transformation, interconnectedness and sustainability (Due to the Covid-19 restrictions you can experience an alternative version of this program on the Biennale of Sydney website).

A key workshop of alternative agriculture practices – soil creation – water saving – carbon sequestration strategies was based on Indigenous agriculture land management practices, presented with Indigenous horticulturalist Clarence Slockee of Jiwah (formerly Yerrabingin) and, Stephen Joseph –University of New South Wales materials scientist and biochar specialist. A final event presented onsite by Andrew was the Foragers Walk & Talk, introducing key ethnobotanicals and their stories, presented with food prepared from a garden harvest day with the Darlo Darlings to mark the end of the project.