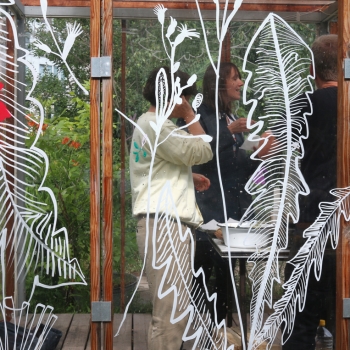 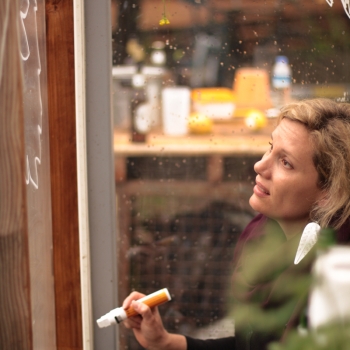 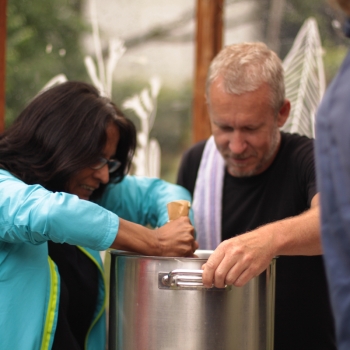 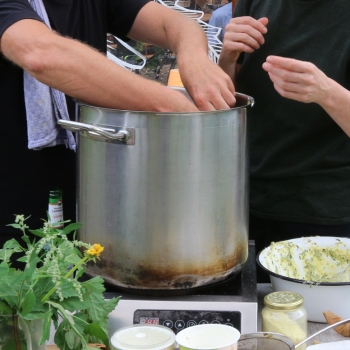 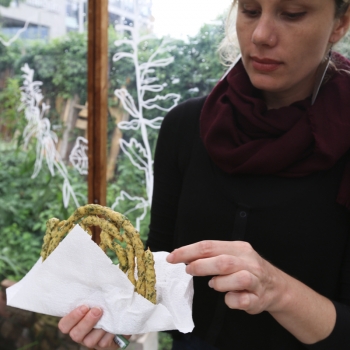 Green Man relates to the pagan mythological forrest symbol and the harvest ritual of dressing straw costumes. From the Germanic tribes to modern times this symbol has played a role in religion and ritual and harvest rites. Reference to such symbols in modern German life is not popular and in some cases taboo, due to the appropriation of Germanic folklore figures by the Nazi propaganda machine that reinterpreted Germanic mythology for nationalist identity purposes.

Both Zoe and I are descended from ethnic Germanic migrants to Australia in the 19th Century. This inspired us to mark historical cultural identity through plants we are familiar with in Australia that may have been part of our German ancestors diet. Zoe drew the leaves and flowers of plants used as ingredients in a batter, while I assisted audience members to fry the batter into shapes symbolic of their own ethnic backgrounds.

Six species of common edible weeds were used, all naturalised in anthropogenic soil globally. The ancient food plants Amaranthus, Dandelion, Purslane, Melde, Potato Weed and nettle are now ubiquitous to diverse climatic zones and can be seen as symbols of co-species evolution between plants and people. Seed carrying is part of human history through foraging and migration and agriculture practices. Plants cooked for the event were harvested from The Hanging Garden project at Prinzessinnengärten, cultivated from seed foraged for a seed bank project during a 2016 residency project at The Centre for Art and Urbanistics (ZKU), Berlin.

This event was part of a professional development mentorship under artist Åsa Sonjasdotter with a research project at Die Laube (The Arbor) working with The Neighbourhood Academy (TNA), co-founded by Sonjasdotter and historian Marco Clausen at Prinzessinnengärten urban farm – an urban farm located in Kreuzberg. TNA is a knowledge-sharing program for experimental and creative community projects based at Prinzessinnengärten.